I think my least effective unit was my Grey Hunters with Rune Priest as they largely just sat on an objective and did very little most of the game. I’m going to tweak that unit and possibly field two units of 5. My Blood Claws however did a sterling job again, able to withstand a massive amount of punishment and dish it out in bags.

I’m also really impressed with the amount of punishment a unit of Wulfen can take and wish I’d kitted two out with Storm Shields instead of one. I had half of an Eldar army shooting them in one game and they only suffered 3 casualties in one turn, feel no pain and two wounds helps but that 3+ invulnerable save makes a huge difference. 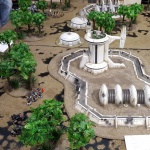 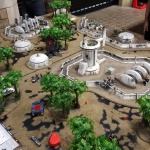 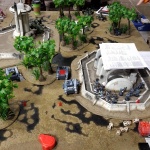 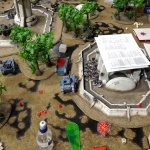 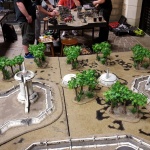 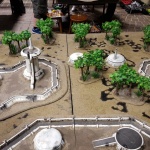 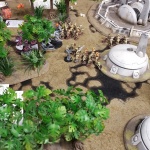 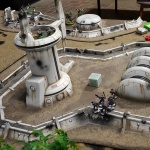 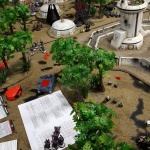 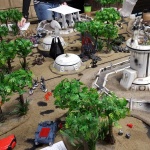 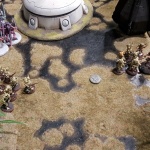 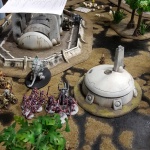 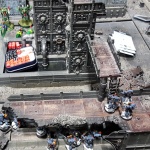 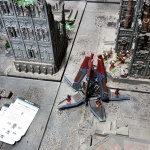 Painting wise, I sadly didn’t get my Wulfen finished. The sheer amount of fiddly details meant that it just wasn’t possible without rushing, which I wasn’t prepared to do, so they received a light coat of varnish before I went. This weekend could well be a busy one so I’m going to limit my weekly challenge to:

Over the weekend I went round the Exhibition in Warhammer World which is always fantastic. A lot of the displays were similar to when I went in September, but a second viewing reveals loads of things I missed last time so was well worth it. There were also all of the new Space Wolves releases in cabinets which helped me decide to pick up one of the new Iron Priest clam packs. The model is really nice in the flesh although it is a little limited because it’s only single pose. I’m currently toying with the idea of painting his armour in a steel colour rather than blue, this with perhaps red and yellow/black accents would make him look that little bit different to the rank and file marines which do tend to blend into one blob from a distance.

Warhammer World was hosting a Throne of Skulls tournament at the same time (this is why we got the larger tables) and it’s really interesting to see the variety of armies being used. I still get frustraited at seeing people gaming with unpainted miniatures. Although there are occasions when its necessary to field an odd unit unpainted in a friendly game (one drop pod and a Grey Hunter with melta gun were just undercoated in my 600 points) if you’re going to a tournament there are really very few excuses.

It was quite interesting to observe how the tournament was run too. Each game was limited in time (I think it was 3 hours) which is something I need to improve on. The last three games also granted all armies special rules – Rage, Counter Attack and Ferocious Charge being added on each game.

My overall impression (and this is a generalisation) was that most of the army lists had been written with a heavy bias to win rather than being written as a themed army. Additionally granting special rules within the tournament actually means you’re changing the base points of each army and giving some armies a massive benefit over others. As a Space Wolves player, I already have Counter Attack on all my marines and my Blood Claws receive Rage at a cost of WS and BS. If I had been playing then my army would have actually become less effective towards the end of the tournament, equally a shooting army such as Tau would have been hamstrung but a close combat army such as Tyranids would have received a massive boost – 20 hormagunts with Rage and Ferocious Charge?!

Although I do want to do some tournaments at some point, I’m not particularly enthused about attending a 40k Throne of Skills.  However I have been told that the Horus Heresy events held at Warhammer World tend to attract people playing much more ‘fluff’ orientated armies so I think this may be the way I go. One thing I did treat myself to is the new Space Wolves Iron Priest model.  Seeing this in the flesh in one of the exhibition cabinets really impressed me.  My only real gripes is that you have to glue it all together at the start, so no opportunity to leave backpacks or weapons off.  It is also doesn’t lend itself to being converted or having it’s pose changed, which is a bit of a shame.  That said it went together really easily and looks really impressive.  I’m currently toying with painting the bulk of his armour metallic rather than the traditional blue colour.