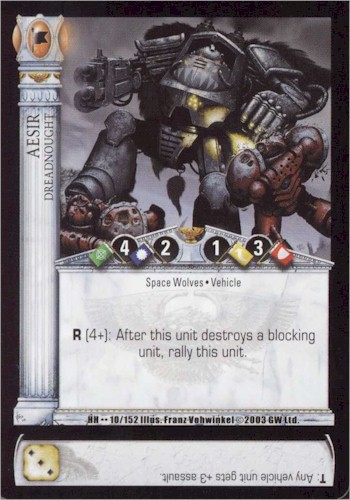 When I collected my ticket I also purchased myself a regular plastic Space Marine Dreadnought.  I’m a Space Wolves collector and have wanted to put together a dread for ages, but held off because I had a gut feeling that they’d be releasing a new plastic one at the same time as the new Codex.  Now that this years Golden Demon has become a possibility, I felt that it was time to fulfil this yearning and put together one of these behemoth’s.

My intention is to hack, gouge and kit bash it into something that portrays the whole ethos behind the Space Wolves.  For those that don’t know, Space Wolves are a Space Marine chapter within Warhammer 40k that have a distinct Norse/Celtic feel.  Google them and you’ll find lots of reference.

I want to also pay homage to the original Space Marine Dreadnought from yester-year, which were more along the lines of a walking robot, in comparison to the walking ‘box’ that is currently the style.  I’ve not got enough time to completely scratch build one of these and in fact I’ve not really got any inclination to as the old walking robot doesn’t fit into the modern style of 40k.  The image I’ve included in this post is one of ‘Aesir’, that was created for the Horus Heresy Collectible Card Game and appears in various art books that the Black Library have released and it is this that I am going to use as a starting point for my entry.

In summary the Dreadnought will be positioned so as to have one foot on the chest of a Chaos Space Marine.  I’ll angle the whole base so that it’s stood on a slope.  The joint that connects the legs to the torso will be lengthened slightly (couple of mm), to give it a little more height.  Instead of a sarcophagus, I’ll have a chest piece with a head.  The torso armour and leg armour will have ‘ribbing’ on it – basically to break it up and make it different to any other Dreadnought I’ve seem.  Both arms will be repositioned so as to give a bit more dynamism.  Finally the heavy bolter arm will be done like the picture of Aesir, so actually on an arm joint rather than the bloody stupid way they’re currently done.