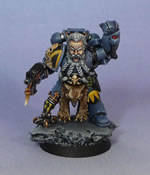 I may have already ranted about this in the past, but I fundimentally dislike many of the colour schemes used for Space Wolves.  The standard Games Workshop scheme is far too ‘baby blue’ for what are essentially savage space marines.  Grey is a popular alternative (I even used it for my 2009 Golden Demon entry), but I find that it limits painting other areas on a miniature – for example rocks on the base or grey hair, highlighting pure grey is also a bugger as the paint becomes quite chalky unless special care is taken.

I’ve done a bit of research on this in the past, but have never found anything that for me looks right along with being relativly straight forward to paint.  However ‘Countersunk81’ on the Cool Mini or Not forums recently posted up a classic Sergeant mini with what I think is quite a good ‘middle of the road’ colour scheme.  Being nosey, I asked how he painted the armour which he explains in his reply.  However to repeat it here for convienience, it’s basically a variant on the Games Workshop scheme recently shown in an issue of White Dwarf…

I think that the important thing to ensure is that intermedary stages are used to ensure a smooth blend, i.e. a mix of Fenris Grey and Shadow Grey rather than going straight to that colour.  The Space Wolf Grey will be a proper edge highlight, with the Shadow Grey adding some blue to the armour.

The other thing that I really like is the base is detailed, but not over the top in look – something that would look good for any miniature.  To this effect I’m going to try and replicate this, by baking a sheet of Super Sculpey in the oven this weekend and snaping bits off to glue onto the slotabase.  The key is that the top of the sculpey is flat, so the miniature fixes on it without too much hassle, this would also look pretty sweet with snow scatter on it.

I also found an online copy of the CMoN painting guide and am very impressed with some of the content and spotted quite a good quite on painting Logan Grimnar starting on page 268.  Of note the hair is very effective (Teracotta > Teracotta + Vomit Brown > Vomit Brown > Vomit Brown + Firey Orange > Firey Orange > Diluted wash of Blood Red).  Additionally the bone colour looks very smooth (Scorched Brown > Bestial Brown > Vomit Brown > Bleached Bone > Wash of Scorched Brown + Snakebite Leather > Bleached Bone > Skull White).  Although this seems quite long winded as it’s only small areas being done would likely be quite quick to whip through.  Comically it’s a more advanced method of how I used to paint the chest eagles on marines – Bleached Bone washed over with Snakebite Leather.

I’m actually starting to get the bug again and want to get some paint onto a miniature…  True to form the weather has now turned inclement in the UK, so precludes any kind of undercoating with a spray.  However it does mean that I can have a really decent bash at assembling some of my army.