Firstly I’ve created myself a Twitter account.  Although I’m generally against “personal” Twitter accounts where people post up the fact they’ve just made a sandwich or gone to the toilet, I can’t deny how easy it is to post up work in progress shots in comparison to every other method out there, plus hash-tagging as you go means it’s really easy to share pictures within the appropriate circles.  Secondly I’ve started up a WIP of my Knights on the 30k Forums.  I joined up months ago but in an effort to keep a bit of momentum going thought it made sense to start a WIP and get my face known a bit more. END_OF_DOCUMENT_TOKEN_TO_BE_REPLACED

I was late home last night, so rather than get into anything major, I experimented shading and highlighting a cupola that I had airbrushed on Monday.  I used heavily thinned Citadel Washes for the shading, two to three parts water to one part wash.  First off I applied Asurmen Blue to parts of the model that would naturally be in the shadow, it dries much smoother than I realised, so the effect was a bit too subtle to be honest.  Next up Gryphon Sepia went into any areas that would naturally collect water if it rained – so in crevaces, around rivets and such like.  This was finally followed by Devlan Mud, but concentrating on the deeper areas I’d shaded with the Sepia.  Highlighting, I decided that I’d not drybrush it.  I know that I’m likely making a rod for my own back, but I don’t like the fact that you have no control over drybrushing and the end effect can look very chalky.  So I used thinned Fortress Grey and then thinned Astronomican Grey as the two highlights.  Astronomican Grey seems to dry out and go crappy so I may have to try a wet pallette for that next time.

END_OF_DOCUMENT_TOKEN_TO_BE_REPLACED 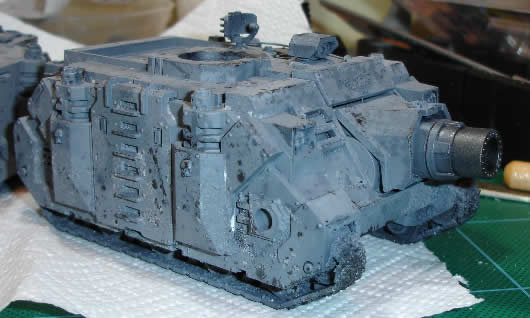 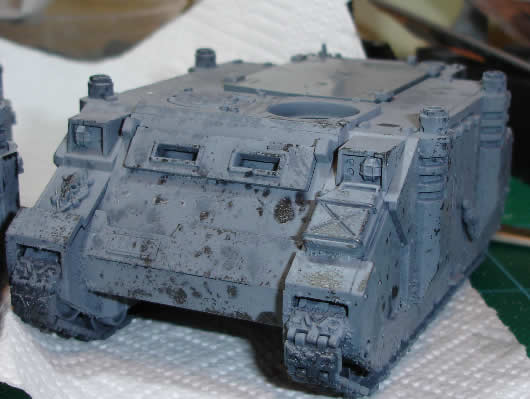 END_OF_DOCUMENT_TOKEN_TO_BE_REPLACED

Yesterday I was able to gain access to the garage at home (there’s normally a car in there), so rather than waste my time as the Dreadnought was ready yet, I experimented with my new Iwata HP-C Plus airbrush.  This bit of kit is worth it’s weight in gold.  The control you have over laying paint onto a surface is fantastic, although I still have a lot left to learn – including how to hold the thing without getting cramp in your hand.  I experimented with a Vindicator and Rhino tank that I had and tried a technique called ‘Salt Weathering’.