I finally managed to get round to taking some shots of the Dreadnought that I entered as my Golden Demon entry.  The paint job let the overall effect down, but overall I’m being positive in that it was a fantastic learning curve. 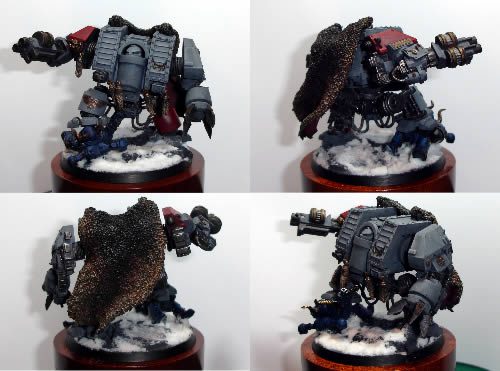 I’ve begun to assemble a pack of Skyclaws now (jump pack marines), and can safely say that the new boxed set integrates with the older plastics without any problems at all – and are infact superior to tidy up as well.  I reckon that 30~35 men and 4~5 tanks will comfortably see me with a 2000 point army – one thing that I do need to do though is to ensure that my actual HQ choices (of which you have double the normal allowed number) are unique and both nicely converted and painted.  I’m aiming to use a Wolf Guard Battle Leader rather than a Wolf Lord, as this would only represent a third of the whole Company.

The topic may have given you a slight indication, but it’s actually my birthday today, sadly I can no longer claim that I’m in my twenties 🙁  However due to having quite a cool family I had a number of fantastic pressies.  From a modelling perspective I ended up with a few ‘essentials’ namely glue, undercoat and more snow scatter plus a box of Space Marine Scouts with sniper rifles, another Space Wolf Pack box and a Canis Wolfborn – oh, plus the vouchers for a Space Wolf Battleforce when it comes out this weekend.  More than enough for me to actually get the vast majority of my army done 😮  There are only a couple of things that I will need to buy to get my army to the point I want – namely another box of Wolf Guard in terminator armour and a box of Devastators – however it might be worth just buying the heavy weapons from a Bitz place instead.  Transports I’ll treat as a separate entity.  I think that these pressies are an excellent result 😀  I’m still not conviced about the Canis Wolfborn, but at the end of the day I’ll never look a gift horse in the mouth.  It might be possible to convert the wolf a bit to make it more fitting – watch this space.