Just a short post as I’ve just caught my finger on the edge of my razor saw and it’s chuffing painful. 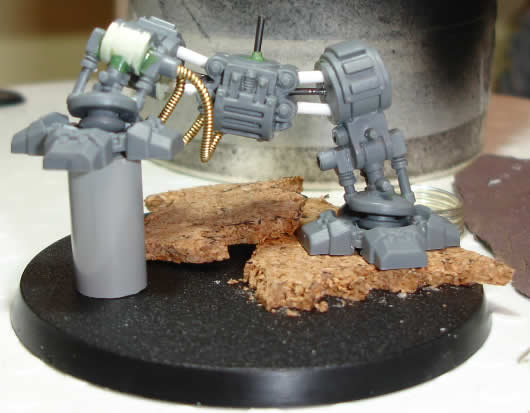 Update: So I now have a plaster on my finger and it’s not inclined to split open and drip blood at the slightest pressure 🙂  As you can see the legs are almost complete.  I didn’t manage to get the last bits of guitar wire cut as I decided to watch a bit of telly and then slice my finger open.  I think that the base looks pretty good as well 🙂 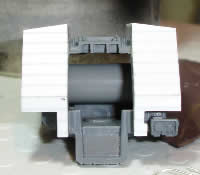 The central arm pipe has been cut and glued into place in the torso assembly.  I may have located a possible rounded cover for the shark tooth design.  Basically I have a number of plastic grease syringes, these are slightly wider than the slot cut from the torso where the sarcophagus was.  They also have a bit that is sloped at one end.  I began cutting this with my razor saw however that ended in me slicing my finger 😀  One thing that has become apparent though, is that the lip on the bottom panel of the torso (you can see it in the picture) may need to be sliced off.  I’ll likely cram a load of guitar string and other wires so that it looks like they’re coming out of the chest into the torso. 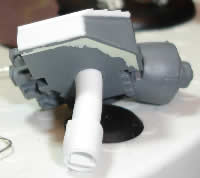 I managed to bend the tube for the right arm over a candle.  I discovered a couple of things during this.  Firstly the plastic tube gets very hot very quickly.  Secondly it has a relativly low melting point – at which point it becomes the equivalent of jellied napalm…  However persistence triumphed and I warmed the tube up a little at a time.  The end result is a fairly gentle bend – but importantly, just enough to let the arm appear to be more fluid.  As this tube is smaller than the tube I set into the torso, I’ve glued thin plastic strip around one end and will file it down until it has a snug fit.  I’m going to secure the tubes into the torso and then will be able to sort out the joint (I hope).