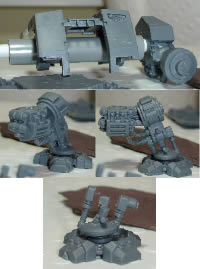 A few shots of the components that have been worked on so far.  Top image is the torso.  I’ve sliced out the sarcophagus and lopped off both spindles for the arm mounts.  I have cut two pieces of tubing to allow the arms to be fitted and positioned as wanted.

I’ve now cut off the pelvis joint struts, in preparation for the custom ones.  I have a piece of plastic rod that is perfect for the larger ones and will likely use wire (for strength) for the central strut.

Finally the calf pistons, carefully cut off the leg – yes it was vary fiddly if you compare it to the uncut leg…

There are numerous things still to do and a self-imposed deadline to hit for the basic conversion to be done.  The next item on my hit list is the long task of starting to fill all the gaps with a mix of green stuff and milliput.  Both of these are epoxy putties commonly used in modelling.  Green stuff resembles chewing gum when mixed and is commonly used by sculptors to make master models (called ‘greens’).   Milliput is a putty that is more clay like when mixed.  By mixing the two putties together you actually gain the benefits of both, a fairly flexible putty that doesn’t shrink when set and can be sanded & drilled.  The biggest annoyance is that it tends to need an initial fill, sand and file and then the process repeated until you get the right result.  Plus you end up getting corners that are very sharp – and thus don’t fit in with the rest of the model.

I’ll likely flit from one piece of the model to the next when I’m doing this (the putty takes a few hours to set fully), but want to get the knee joint done so that I can then move onto the other leg and pelvis.  This will then give me the basic pose for the Dreadnought and I can actually start to work out the torso and then arms.

My aim is to have the legs and torso elements pretty much finished by Sunday 9th August (12 days away) as I have full access to the garage for the whole day & evening and can get the Dreadnought sprayed and then airbrushed, as I’m not able to do this inside.  I’ve a few ideas up  my sleeve that I’ll have to try out beforehand as well.  Depending on how well I get on, I may also take the 10th August off as a holiday, as I’ll also have access to the garage.  Now the only thing that may cause a slight issue on that front is it is my intention to try and sculpt a large fur onto the back of the Dreadnought, as per the original artwork.  Nothing that actually resembles a wolf, bear etc, just a large patch of fur.  Smooth on one side and furry on the other like a real skin.  Curling the edges inwards will also make it look even more realistic.  If I can make this so that it’s separate to the model then I will have no problems, but I’m currently not sure if I can.  Of course it could just look shit when I do it.